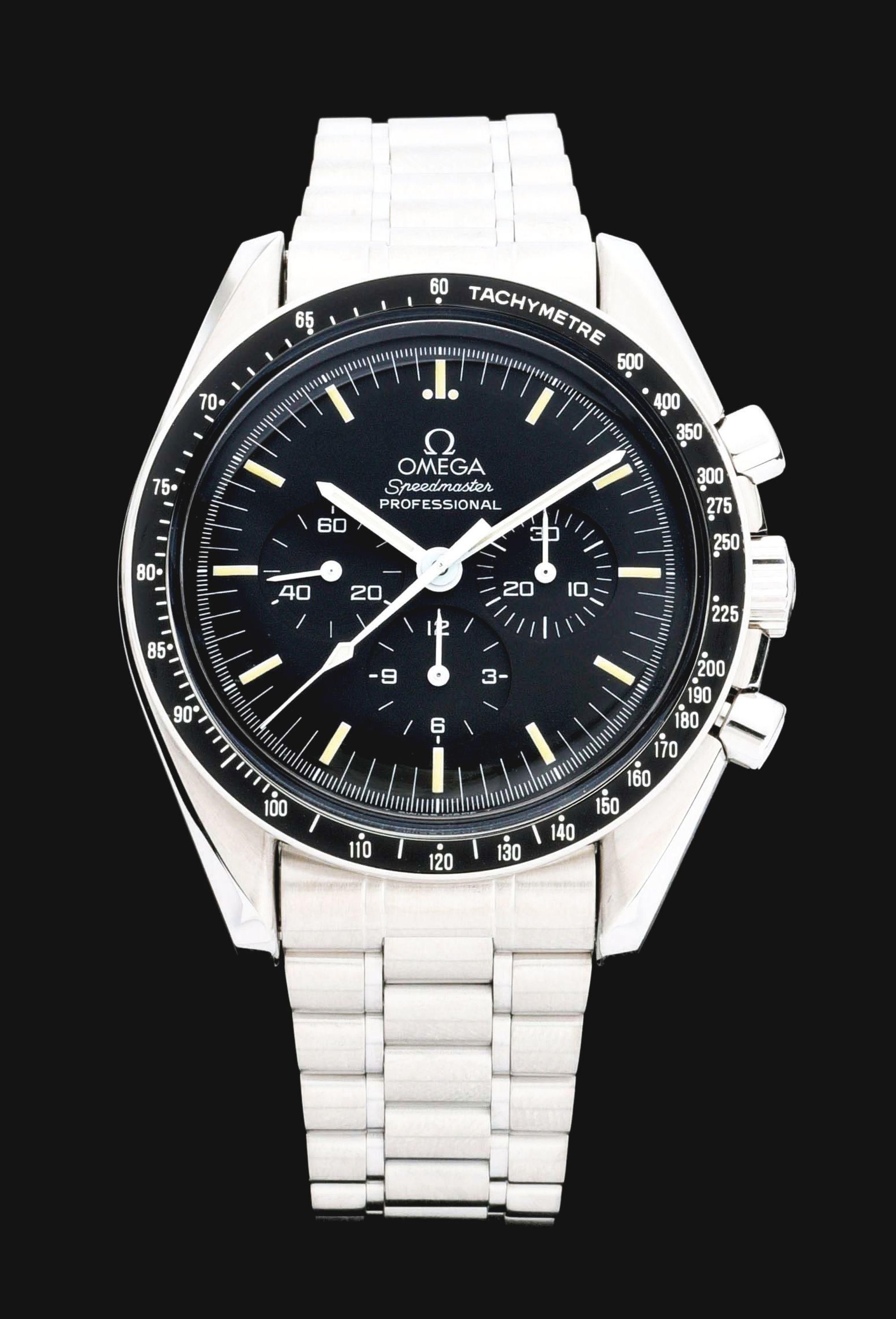 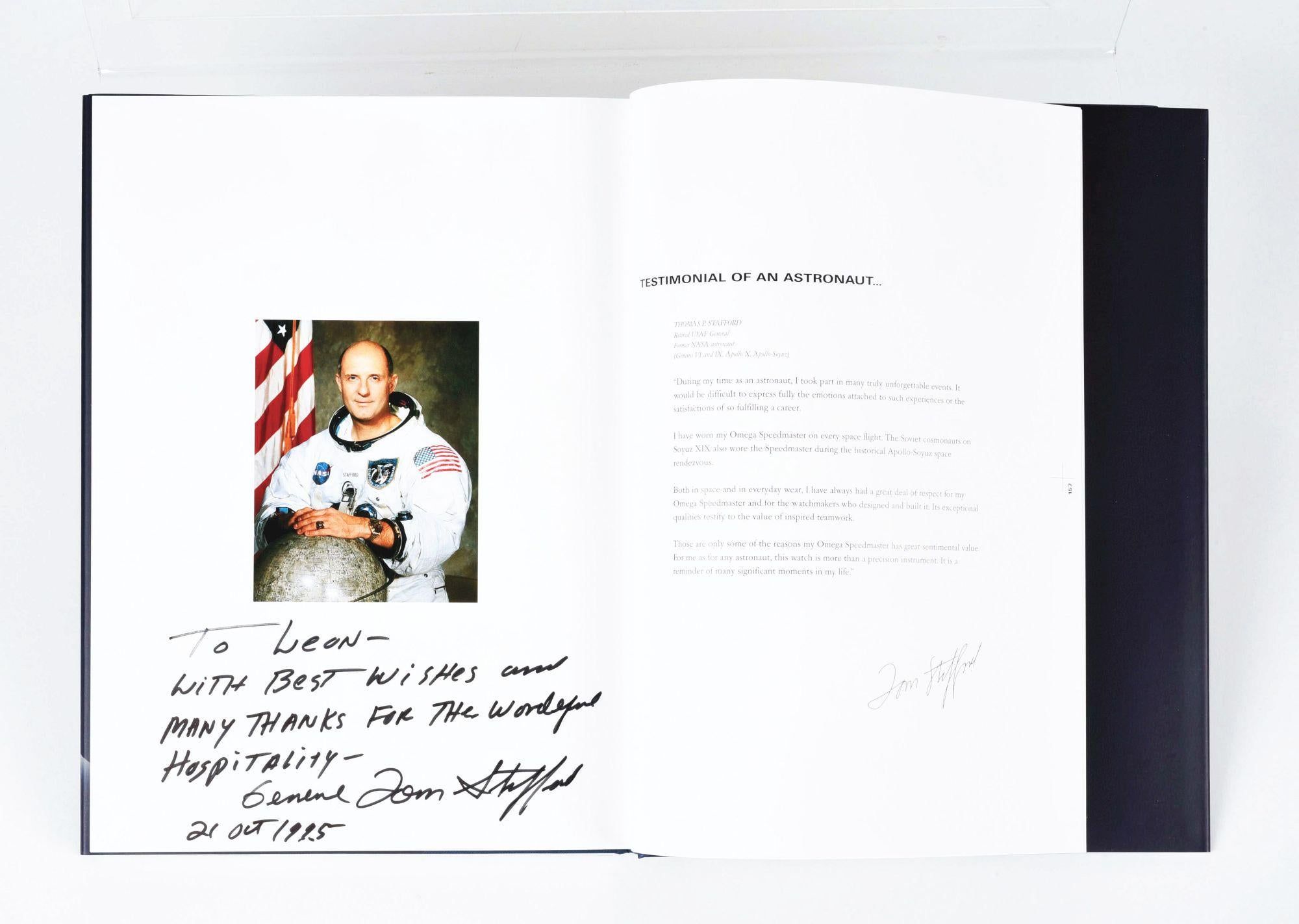 The Omega Speedmaster “MIR 365” is an extremely rare limited edition of only 28 pieces, having each spent a total of 365 days "flown" aboard the MIR Space Station from July 1993 to July 1994 before being offered for sale in 1995. In stainless, the MIR 365 was available with either a steel bracelet (18) or leather strap (10). The number listed (28) is for the two combined. An additional 7 pieces were made in 18K yellow gold. Men’s Omega Speedmaster Professional “MIR - 365 Days” limited edition no. 11 of 28, stainless steel chronograph wristwatch, full set with original box, papers and accessories. Case diameter is 42mm. Caseback numbered 11 of a limited edition of 28 pieces which were flown in space for one year. Date of manufacturer, 1993. Reference No: ST 345.0022.105 – PIC 3596.50.00. Movement No: 48’294’494. Manual wind, 17 jewel mechanical movement, cal. 861. Stainless steel Omega bracelet with deployant buckle, stamped 1479. Signed “Omega” on caseback, dial, bracelet and movement. The watch is preserved in near mint condition, with virtually no signs of wear, and has only been out of it’s case a handful of times beyond it’s time on MIR. In 2017, It was returned to Omega for a complete maintenance service “due to the oils of the movement being dry”, as stated in the Omega service records. There are a few very light scratches present to the case back from Omega’s servicing and testing of the watch, otherwise the watch presents in near mint to mint condition. Complete with it’s original “full set” accessories, the watch includes a large aluminum locking carrying case with both original keys, black leather bound book-type presentation box, original numbered limited edition certificate (11/28), original Omega hang tag complete with retail price, reference number and matching serial number, original “Moon Watch” VHS tape, original “Moon Watch” hard cover book with personalized autograph by NASA Astronaut General Tom Stafford, original “Houston Space Center” ball-point pen, original numbered tent card (11/28), large Omega “De Collection” booklet, original Omega International Warranty card with holder, Operating Instruction booklet, and a copy of the 2017 factory service records along with the red Omega zipper-pouch watch holder. This year marks the 25th anniversary of the MIR Speedmasters originally being offered for sale by Omega. Don’t miss this chance to own one of the most important and sought after Speedmasters ever produced! Literature: The same reference/model watch is featured in Grégoire Rossier and Anthony Marquié, Moonwatch Only: 60 Years of Omega Speedmaster, pp. 400-1. Catalogue Essay. While many commemorative endeavors were made for various space missions and accomplishments, the present watch is actually part of an aerospace project, as it physically stayed in space for 365 days at the MIR space station, earning the coveted title of a “flown” wristwatch. MIR, meaning peace or world in Russian, was a space station that operated in low Earth orbit from 1986 to 2001, serving as a microgravity research laboratory. One of the research projects that was conducted on the MIR was in July 1993, which allowed for 35 Speedmaster Professionals to be taken to the space station for 365 days with the purpose of observing and forming the effects of microgravity on watch movements. There are in total 28 stainless steel examples, and 7 pieces in yellow gold. After the 35 Speedmaster Professionals were tested on MIR, flown in space, returned to Earth, Omega scrutinized them and later offered them for sale with an engraved case back noting this epoch-defining milestone. Condition: (Near Mint.) Dimensions: